Saturday Spotlight is a weekly feature in which I honor a book, character, or author that has consumed my mind and may be the cause of future therapy sessions.

[I’m really sorry I posted this so late! My internet at home has been sketchy lately, so I’m camped out in a coffee shop frantically scheduling blogs in case it doesn’t sort itself out int the next few days. Ugh. Anyway. Life goes on.]

The Invisible Library by
Genevieve Cogman is a book written for
bibliophiles. It’s a book about books. But like, in the coolest way possible

If you’ve ever wondered what the perfect job would be, worry no longer, because I found it in this book. Meet Irene, a spy for the Library. As in THE Library. It harvests fiction from various alternate universes, and Irene’s job is to search through ifferent realities for dangerous books. Sounds splendid, right? But it only gets better.

The Library is massive, and it can be accessed through any library in the world. I may or may not have tried to access it to no avail. Alas, I don’t speak the epic secret Librarian language that allows the spies to manipulate any object in the universe. Oh, a door’s locked? WORRY NOT. Just tell it to open in the Language and BAM. You’re in.

Irene is sent on a mission to an alternate London to hunt down a copy of Grimm’s Fairytales. She and her enigmatic assistant Kai arrive only to discover that the very dangerous book has been stolen. The very nature of reality is at stake if they fail to retrieve it. To make matters worse, the laws of nature have been bent to allow for supernatural occurrences, meaning that vampires, fae folk, and other magical creatures roam free.

I want to crawl inside this book and live there. I want to become a Librarian and go on secret missions to retrieve books. Most importantly, I want to meet a dragon and discuss our favourite novels over tea. Is this too much to ask? 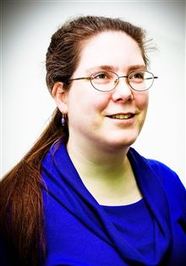 Genevieve Cogman started on Tolkien and Sherlock Holmes at an early age, and has never looked back. But on a perhaps more prosaic note, she has an M.Sc. in Statistics with Medical Applications and has wielded this assortment of jobs: clinical coder, data analyst and classifications specialist. Although The Invisible Library in her debut novel, she has also previously worked as a freelance roleplaying game writer. Genevieve Cogman’s hobbies include patchwork, beading, knitting and gaming, and she lives in the north of England.