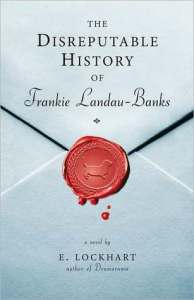 Frankie Landau-Banks attends one of the most privileged schools in the country.

She is popular, cute and funny.

Her main preoccupation is the gorgeous Matthew Livingston.

But that’s not all there is to Frankie.

Then Frankie discovers Matthew has been keeping secrets from her.

What will she do to get even? How far will she go?

It’s up to Frankie…

I started reading The Disreputable History of Frankie Landau-Bankswith relatively low expectations. I’d been looking for a lighthearted, mildly entertaining novel to help my brain recover from PESD (Post Exam Stress Disorder) and stumbled across the paperback on my sister’s bookshelf. Funnily enough, I didn’t even register that it was by E. Lockhart until I was about ten pages in, and by then I’d already kissed the rest of my plans for the day goodbye.

I should’ve learned from We Were Liars that one should never underestimate E. Lockhart’s ability to turn a seemingly ordinary teen love story into a novel that can practically rip the entire world to shreds.

There’s so much I want to say, but I’ll try and limit it to two main points:

At first glance, Lockhart’s novel seems like yet another story about a teenage girl’s jealousy-driven revenge rampage on her lying boyfriend, in which she cuts holes in his favourite T-shirts and basically acts like Taylor Swift in her Blank Space music video.

Yeah, it has absolutely nothing to do with that. Replace the emotional wreck of a teenage drama queen with an ambitious mastermind, and then throw in some genius pranks, infiltration and a secret society of pompous teenage boys. Then wrap it all up in a beautiful little package of expert plotting and an inimitable narrative style, and you get a breathtaking novel that deserves every award it’s won.

The dark little commentaries in this novel are pure perfection. And if there’s one thing I absolutely love in a YA novel directed at middle to upper class teenage girls, it’s a social commentary that will make them think.

In this case, Lockhart deals with feminism and patriarchy in a predominantly white upper-class setting, but she writes about it in such a way that younger girls might finally be able to understand the reasoning behind feminist attitudes. Frankie, at fifteen, questions the sexist attitudes and double standards at her school. For her, it’s not enough to combat male power (like the all-boys secret society) with attempts to establish all-female power – she wants to infiltrate sexist institutions and demolish them from within. She questions and challenges the way in which boys see her, because she doesn’t want to have to pretend to be an air-headed piece of arm-candy just because she’s a woman. But then Frankie begins to act, and the results are as inspiring as they are destructive.

Lockhart is steadily emerging as a prominent YA author, and rightfully so. Evidently, she has something to say through her novels (which are essentially some of the most well-written YA books on the shelves right now) and I, for one, am beyond prepared to listen.

Recommended to: All teenage girls and boys everywhere.

This quote is probably going to become my new mantra: